Madeira is colorful, full of flavors, aromas, amazingly nice people and its diversity in such a small area takes your breath away. The island is only 57 km long, but when you pass it, you feel like you are on a trip around the world.

Madeira is a Portuguese island located in the Atlantic Ocean 662km from the African continent and has a population of 240,000, of which almost half live in the capital Funchal. Although Madeira belongs geographically to the African continent, it is part of Portugal. You are here in the European Union, so here you will find all the standards of the EU countries. They pay in euros and take cards almost everywhere.

The island has an area of only 750 km2. Madeira is called the island of eternal spring, it is clearly a piece of exoticism in Europe. Banana plantations and other tropical fruits will give you a taste of South America and the green hills shrouded in a fog over the wild ocean will not interfere with the landscape in Thailand or Hawaii. All this in the standards of the European Union and at affordable prices.

The biggest surprise? The maturity of the island. All the houses shine with new plaster, there are beautiful flower and fruit gardens around, you drive on great roads and there is no rubbish. A well-kept piece of land where everyone speaks English and there is a pleasant stay.

When to travel to Madeira?

Madeira is called the island of eternal spring. If you set off in the high season and the spring weather means temperatures of up to 20 degrees for you, you can throw a few layers of clothes out of your suitcase in peace.

The best is probably September when with the end of the season the number of tourists decreases, but the weather is still stable almost without rain and warm enough for swimming.

Summer in Madeira (June to September) is almost without precipitation and with temperatures between 24-27° C. These are temperatures in the shade, but the strong rays of the sun raise the sensory temperature much higher. The shore is hot and the ocean is pleasant.

Inland, more clouds form, which descend from the mountain tops in the afternoon. You will rarely experience a completely blue sky here, but despite the clouds, the weather was much warmer than we expected. It does not get too cold even at night (18-20° C).

Temperatures in Madeira in the mountain areas in the summer are around 10-15 ° C. Count on the fact that even in summer the weather can change quickly and when the fog falls, you will not see a step. A strong wind blows on the open slopes of the mountains.

Between November and February is the rainy season, when it rains more often, especially on the north side of the island. A strong wind is also blowing during this period. Nevertheless, the winter is very warm – on the coast temperatures are between 17-20 ° C and at night do not fall below 13-15 ° C.

In the spring, the weather in Madeira is very variable and it may rain on the north coast of the island, but the sun shines in the south.

In Madeira you will find various climate belts

Madeira is very mountainous and the mountain slopes rise sharply from the coast almost along the entire island. Thanks to this, the so-called altitude zoning is manifested on the island, which creates various climatic zones with increasing altitude. At positions up to 200 m above sea level, tropical crops (especially bananas) are grown, from 200 to 400 m above sea level, then subtropical fruits and even higher also vines, apples and grains. At higher altitudes around 1000 m above sea level grows a typical laurel forest, which turns in lower altitudes into eucalyptus forests.

The northern coast of the island is much greener than the southern part. Vegetation also varies depending on the specific coast. While the north of the island is covered with green forest, in the southern part, banana plantations are planted on neat terraces. Every piece of Madeira is different and diverse, just drive 10 km and you feel like you are in a different country.

Madeira is not much for swimming. I don’t know who was the first to release this rumor into the world, but it’s not true. This is not a typical vacation destination with miles of beaches, but if you want, you can swim every day elsewhere. Once on a beach with black sand, the second time on a pebble beach, where there is not even a foot, and the third time, for example, in a natural lava pool.

These are the three most beautiful beaches in Madeira:

Natural lava pools in Seixal
They all go to paid ones in Porto Moniz and here you have them for free and also nicer. Just think carefully if you want to drive all the way down to drive back. We didn’t risk it and ran down on foot.

Sandy beach in Seixal
Amazing beach with black sand, where you can also enjoy the waves.

Prainha do Canical
Black sand beach in a bay that is not damaged by any pier.

Many beaches in Madeira have access to large rocks and access to lava pools can slide on algae-covered rocks, so I would recommend packing water shoes.

The beaches of Madeira are magical, yet if you enjoy endless sandy beaches, take a trip to the nearby island of Porto Santo. You can be there by ferry in about 2 hours and the local sand is said to even have healing effects.

A holiday in Madeira would not be complete if you did not go through at least one levada. Levadas are canals that were built to bring water from the mountains to the valley. The advantage is that the trails around them have only a low slope. We liked Levada Caldeirao do Inferno and Levada Caldeirao Verde the most, Levada 25 Fontes is also famous. A short undemanding levada is Balcoes from Ribeiro Frio.

Some levadas are not suitable for people suffering from dizziness. You will have a completely unique experience during a hiking trip in the local laurel forest (Laurisilva), which was even inscribed on the UNESCO list due to its uniqueness.

In the past, the laurel forest covered most of Europe and the island of Madeira was all densely forested – in translation, the word Madeira means wood. Due to logging and the expansion of agricultural areas, the area of ​​the laurel forest in Madeira has shrunk to 150 km2, yet remains the largest of its kind in the world. The laurel forest is still humid and therefore creates a fairytale atmosphere. When the fog is swallowed up by the fog, it starts to get scary!

Madeira is located in the middle of the deep ocean, so you can meet dolphins and several species of whales. In Funchal you will find several companies offering cetacean sightings on special ships. You can also go to sea in style on a replica of Columbus’ ship Santa Maria.

For traveling in Madeira, a car is basically a must. There are several bus connections around the island, but bus transfers will greatly limit the program. If you are not driving, there is nothing left but to pay for guided tours or a taxi.

The traffic is not heavy (except in the morning and evening rush hours in Funchal) and the same rules apply as we know them from continental Europe. You certainly don’t have to worry about the confusion of trumpets and overtaking. On the contrary. In Madeira, traffic is flowing at a calm pace. If someone stops in front of you and talks to a passerby, don’t even think of honking at him. It’s not worn here.

On most major routes, you will find a special sign, which means that in good weather you can drive 10 km / h faster than the signs show. And be prepared to be patient even when driving off-road. You will climb steep hills (you will see incredible values ​​of 32 ° ascent on the sign).

On the contrary, the main road around the island will surprise you with its modern design, where you travel through dozens of tunnels and roundabouts. Due to the demanding terrain, you are moving at a much slower speed than indicated by google maps, so count on it. And overall, don’t rely on GPS much. It will often take you to narrow, steep side streets – you better follow signs that are everywhere. There are about three main roads on the island, so you will definitely not get lost.

Food in Madeira – what to taste

In any case, tropical fruit will come first. Banana, maracuja, avocado, mango and many other fruits are grown in Madeira. And what is not grown here, they bring from Portugal (melons) or the Caribbean and South America (pineapples, papaya) ripe and in great quality, moreover at very attractive prices. Apart from Funchal in Madeira, you will not find markets, but the fruit is also excellent from the supermarket and an order of magnitude cheaper than from the market in the capital.

Typical dishes in Madeira – carnivores and fish lovers will enjoy themselves. A typical Madeiran dish is espada, an ugly long black fish that is grilled with bananas. Don’t be put off by the repulsive appearance when raw, because it tastes great. Fish and seafood are among the most common dishes on the island, most restaurants offer tuna steaks, shrimp, mussels, squid… Occasionally you will also find traditional Portuguese salted cod Bacalhau.

In all establishments, they will offer you as an appetizer Bolo do Caco, garlic bread, which is served with various fillings in bistros as a small lunch or snack.

Madeira wine and other typical drinks

Madeira is a small wine grower and practically the entire production of the island goes to the production of dessert fortified wine Madeira. It resembles port wine and is produced in several variants, from dry to sweet.

The very most common alcoholic beverage is poncho. The mixed drink contains sugar cane brandy, lemon and honey (traditional variant), or passion fruit, orange or tangerine juice. You will find poncha bars on every corner. They should mix you a fresh poncho, in non-tourist establishments the ratio is significantly in favor of schnapps. Poncha at sunset, what more does a person need for happiness?

On the island of Madeira you can taste a very unconventional cocktail. Nikita is a mix of beer, white wine, pineapple juice and pineapple ice cream. The creamy consistency is reminiscent of a shake. This sounds scary on paper, but it doesn’t taste bad at all.

Sugarcane rum is also produced on the island. The distillery in Porto da Cruz is still the only steam-powered distillery in Europe.

Madeira is incredibly varied, so there is still something to discover. There are about a million amazing places to see and things to explore that a week of exploring this island will be short for you.

You may also like: “11 treasures of Portugal for your perfect vacation” >>

Take your children to Portugal and choose from the best Algarve resorts for families. We have compiled an overview of…

You long for walks around the city, exploring new places, architecture and tasting new dishes. And are you afraid that… 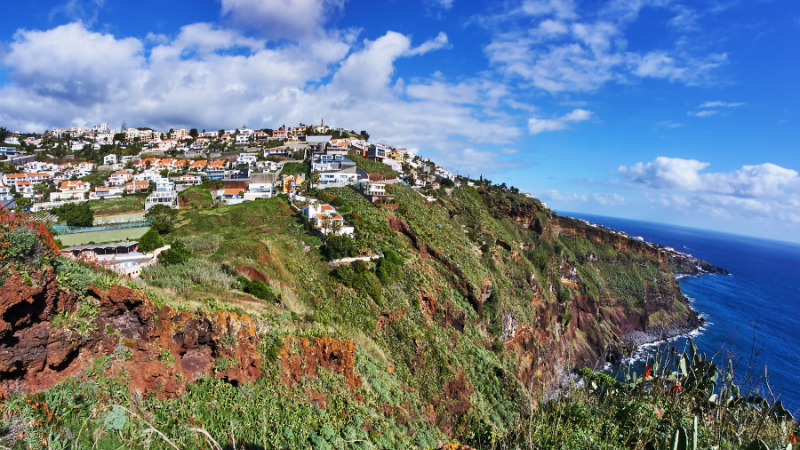 Madeira is an evergreen island that boasts the nickname “Pearl of the Atlantic”. Take a look at the most beautiful…